Home > Posts > Articles > Home & Garden > What Is the Planetary Health Diet, And Does it Work?

What Is the Planetary Health Diet, And Does it Work?

The Planetary Health Diet is not only a healthy diet but also a promising way to reduce our carbon footprint. In this article, we explain, what it is and how it works.

There is no shortage of issues to be worried about concerning the future of our planet. As our global population soars, human impact on Planet Earth has never been more destructive—polar ice caps are melting at extraordinary rates, hunger abounds, many regions are experiencing hazardous weather more frequently, and disease continues to shake nations across the globe.

While it can be quite discouraging to ponder these things, conscientious people with their eyes on a better future shouldn’t lose hope, but rather seek ways to reimagine everyday life on earth to reduce their carbon footprint. And fortunately, there are numerous ways we can do this. One often overlooked way to protect the planet comes through the choices we make in our diet.

The EAT-Lancet Commission, a group consisting of dozens of scientists and agricultural experts, recently sought to examine our food production processes at large, as well as human nutritional needs, aiming to help us rethink a broken food system. They looked closely at which foods are most guilty of wasteful production and processing, and what we can do differently while still maintaining a balanced and healthy diet.

In the resulting report, we learn that by making changes to the average person’s diet, families can not only contribute to the cultivation of a more sustainable food industry, but also decrease their own health risks. Using their findings, the commission produced dietary guidelines which have come to be known as the Planetary Health Diet.

What is The Planetary Health Diet?

The guidelines as proposed by the EAT-Lancet Commission shouldn’t look unfamiliar to anyone who has knowledge of simple veggie-forward diets such as the Mediterranean diet. But the prime objectives of the Planetary Health Diet include keeping calories at an average of 2,500 per day, and strictly limiting meat, sugar, and other heavily processed food.

For brief context, the average person living in the western world would need to reduce his/her meat and sugar consumption by about half, while doubling the amount of vegetables, especially leafy greens. Protein can be boosted by consuming legumes or beans, and whole grains and cereals are preferred. Eating local, organic, and seasonal produce and getting meat only from trusted sources is also essential to reduce one’s carbon footprint. See the chart below for more information on daily figures. 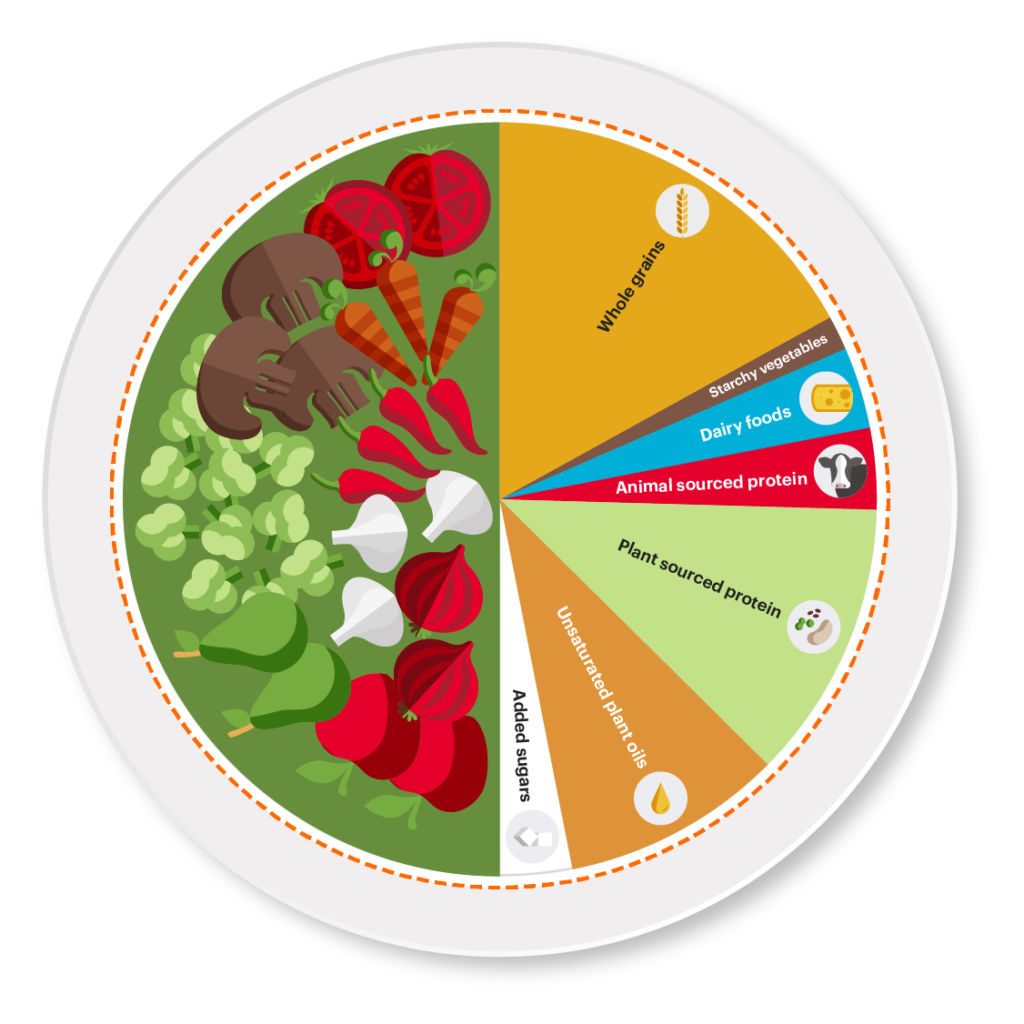 Will It Be Hard to Adjust?

For much of the western world, people have difficulty imagining a diet with little animal protein or added sugar—which is found in most low cost processed foods. People consume roughly six times the amount of red meat that is recommended by this diet. But for many other places in the world, it is not an adjustment at all. In many countries, meat is seen as a delicacy and the bulk of a person’s protein already comes from plant-based sources.

While it may take some getting used to, you will likely find that it is not as hard as you think, and that you won’t have to sacrifice taste. In fact, opening the door to fresh, local produce often shows people bold new flavours and recipes they were unaware of. For the sake of the planet, as well as your body, consider adjusting your family’s meal plans to reflect the Planetary Health Diet.

Read Next: How to Grow a Family Garden

Read Next: Natural At-Home Stain Removers for The Toughest Stains

Read Next: Natural Ways to Keep Bugs Out of Your Home

How to Make Your Balcony Bee-friendly

We offer some tips on how to make your garden or balcony bee-friendly and thus help the bees survive.

Many take the year’s starting months to finally get the house clean (and to stay clean!). Creating a consistent cleaning routine can help you keep your motivation and effort throughout the whole year.

Christmastime is all about traditions, especially when it comes to cookie baking. We have gathered our top five favorite cookie recipes for the holiday season.

How to Make Your Balcony Bee-friendly