What to do when Grandma doesn’t respect your parenting rules

One of the pleasures of being a grandparent is spoiling your grandchildren - but what happens when it interferes with the parents' rules?

I often find myself wishing my family lived closer to either set of grandparents. From free childcare and frequent family dinners to having that constant source of advice and moral support, there are a lot of advantages to having Grandma and Grandpa present and involved in your child’s daily life.

It’s not just an issue of convenience: Studies say close grandparent-grandchild relationships have healthy benefits for everyone involved. The Gerontological Society of America, for example, found that contact with grandkids reduced depression among grandparents. Another study by the Department of Social Policy and Intervention at the University of Oxford found that children with a high level of grandparental involvement had fewer emotional and behavioural problems.

But along with the benefits, there are challenges to raising your kids close to Grandma. My friends share horror stories of grandparents plying their kids with forbidden sweets, disregarding bedtime and even encouraging their children to lie to them about what they were allowed to do. 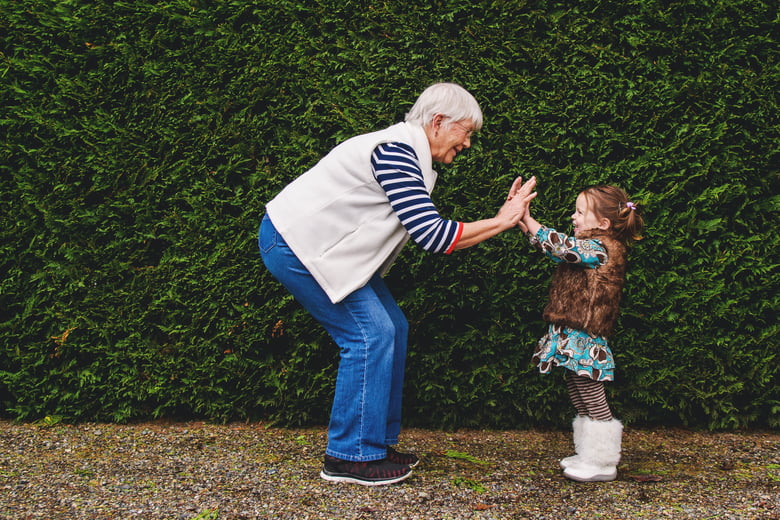 According to Susan Nason, founder of the Parent Whisperer NY, it’s not unusual to sometimes feel undermined, disrespected or as if your rules are being ignored by the village that helps you raise your child. Nason says grandparents may trigger complicated feelings in us as parents that are related to our own childhoods and how we were raised.

“Every mom tells herself, ‘I’m going to do it differently!’” Nason says.

Below, Nason and other experts share what you can do when Grandma or Grandpa won’t respect your rules.

Though it may be hard to imagine that Grandma isn’t aware when she has overstepped a boundary, Nason suggests you give her the benefit of the doubt, as parenting is different now than it was 40 years ago, and every family is different.

For Olga Mecking, a mom from the Hague, Holland, the solution starts with making her children’s grandparents understand that their decisions have real consequences for her and her family.

“If they overwhelm the kids, I’ll be the one dealing with the tantrums and problems while the grandparents are back to their quiet, organized home,” Mecking says.

According to Nason, relationships work best when both parties feel heard and respected.

“You need to clearly communicate the rules you’ve come up with as a family,” Nason says.

Don’t just tell them what your rules are, Nason advises, but rather explain why they’re necessary and important to you.

Put yourself in Grandma’s shoes

You have a job to do as parents, but Nason says grandparents feel they have a job, too. While some grandparents are stricter on their grandchildren than their parents would like them to be, it’s more often the case that a grandparent sees it as their role to spoil their grandkids.

While she encourages parents to make their case, Nason advises they also try to be understanding — and, when they can, let it go.

“My parents will give my kids sweets even when I think they don’t deserve them,” says Claire Zulkey, of Evanston, Illinois. “I don’t really get that bent out of shape about it. Grandparents gotta grandparent. They’re just enjoying their turn being the good guys. I hope my kids have kids so I can do the same.”

“There are always more sweets than I’d like,” Bregel says. “That’s never going to change, but that’s why they’re only there one afternoon a week, too. So I can let that go.”

After you’ve acknowledged Grandma’s feelings and explained your family’s rules, the goal is to negotiate an arrangement that pleases both parties. Bregel, for example, sets limits around gift-giving that she and her in-laws agree with.

“They can buy as much crap as they want for their own house, but it doesn’t enter mine,” she says.

Satisfying everyone may mean scheduling time together differently, Nason says. If Grandpa insists on serving chocolate cake for lunch, for example, visits might have to occur after mealtime.

“The last time we visited my family, bedtime went completely out the window and we kept skipping naps,” says mom Megan Rogers, of Washington, D.C. “My parents didn’t mind that my kiddo was cranky, but we sure did!”

Next time, Rogers says, she plans to be more firm about the children’s schedule, even if it displeases the grandparents to see the children aren’t eating along with everyone else.

Work toward a compromise

Nicole Slaughter-Graham, of St. Petersburg, Florida, says she was furious when she first discovered her mother-in-law was teaching her son about the Bible against her wishes.

“I tried to talk to my mother-in-law about the issue, but she wouldn’t listen,” Slaughter-Graham says. “At that point, we were left with two choices: bend or keep our son from his grandmother.”

According to Slaughter-Graham, they weren’t willing to do the latter, so she and her husband came up with a workaround.

“[Grandma] still does what she wants, but we are constantly talking to our son about other belief systems and make it clear to him that her beliefs are her own, and they don’t have to be his or anyone else’s,” she says.

“If they can tolerate that, that’s the best solution,” Nason says. “For some families, that would be unacceptable.”

Every family is different, and you’ll need to work toward a compromise that fits yours.

Stick to your guns

Whether you have strong opinions over issues like screen time, swearing, sleep training or spanking, they’re your children and it’s your right to make the rules. In extreme cases, Nason says, parents even have the right to deny grandparents contact with their grandchildren.

“Every family is different,” Nason says. “If your family is vegan, it may be a dealbreaker if Grandma feeds your child meat.”

While it’s human nature to let some things slide, Nason cautions that an inability to set boundaries may reflect a lack of confidence in yourself as a parent. If you have trouble enforcing boundaries once you’ve set them, Nason suggests you get help from a professional family counselor.

You’ll continue adapting your parenting strategies as your children grow, so talking to Grandma and Grandpa about their role in raising your children is a conversation you’ll probably have more than once. A family counselor or therapist with experience supporting the entire family system can help everyone adapt and stay connected.

Evaluating Your Parents’ Well-being over the Holidays

Christmas visits provide an important opportunity to observe your parents’ well-being to determine whether they may require additional help.

What Tasks Should Seniors Outsource?

Whether you are helping carry out tasks directly, or hiring outside assistance, it is essential to identify the everyday tasks for which help is required.

The Pros and Cons of Senior Home Sharing

Home sharing is gaining in popularity among seniors, largely due to the broadly increasing cost of living. In this article, we will examine some of the pros and cons to help you determine if it is a good option for you or your loved one.

Evaluating Your Parents’ Well-being over the Holidays

What Tasks Should Seniors Outsource?

The Pros and Cons of Senior Home Sharing